The Way of Mary: Whatever He Tells You

The way of Mary, as we’ve seen, sometimes requires action, action that is simultaneously careful and daring, taken at just the right moment. Following in this way can never, though, be reduced to action. It can never be simply a matter of effort.

In Mary’s own story, a signal moment is offered to us in the gospel of John. The transformation of water to wine in the second chapter is often rightly noted as a turning point in the life of Christ: his first miracle and the start of his public ministry. We might also look, though, at the pattern modeled by Mary in this event. All of Jesus’ disciples are present with 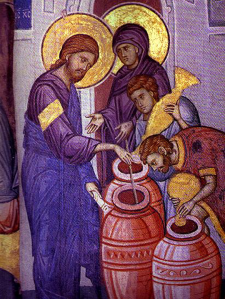 him at a wedding, but it is she who notices that the hosts are running short of wine. Preachers often draw our attention to the magnitude of this crisis in a traditional culture, but, really, anyone with experience as a host knows that this is a serious matter. (Should I add that even in my own house, a hapless husband may have been pressed into an emergency mission to *go buy more wine*?)

And Mary does act. Like the mothers of Israel before her, she responds quickly and decisively. Their actions were ones that embodied reference to God and a commitment to God’s purposes. Now, though, Mary speaks to God in the flesh, and so her actions refer to the matter to God in a way that is direct and personal. She does not recommend to Jesus any particular action, but she does bring the concern immediately to him: “They have no wine.”

There is a wordless agreement in the exchange that follows, an agreement beneath an exchange that seems initially to be disagreement. (And if that algorithm is a confusing one, well, it’s also one that will be immediately familiar to any mother of an adult child). In his initial response, Jesus seems to demur, and certainly gives no guarantee that he will act: “Woman, how does your concern affect me? My hour has not yet come.” For her part, she does not press him, but even without any guarantee, she reaffirms the sense of having committed the matter to him. Indeed, she draws others into this act of handing-over: “His mother said to the servers, ‘Do whatever he tells you.’” And Jesus, too, in the end, does respond.

For us, the analogous action of committal is prayer, and this, I would argue, is the single most foundational practice of a Marian way. Our first task is an explicit, conscious committal of the difficult or dangerous situation we face to the Lord. And we, too, are called to refer the matter to God in the way Mary does, through Christ. This may be an individual action as was Mary’s, or it may be communal, in a way that returns us to the pattern of the Visitation. Every “prayer service for peace” is a form of this referral, but in a sense, every prayer and all prayer is, too. The great prayer of the Eucharist gathers up every act of committing-to-God. We do not dictate a plan of action, and we are not answered with any guarantee. We simply begin by acknowledging where the ultimate source of power to resolve the problem lies.

Like the servants in this account, we may well be called by God into a second form of action. It is, after all, only as they follow Jesus’ direction, filling large, empty jars with water, and then taking a small serving to the head waiter, that they find the wonder that has been performed. Here, though, having has passed through the process of committal to God, action has been transformed into obedience.

Without this element, responses to evil may be well-intentioned. They may be courageous and creatively nonviolent. They may even have some effect. But they will ultimately be an exercise in pelagianism—and in exhaustion. They are not Mary’s way.